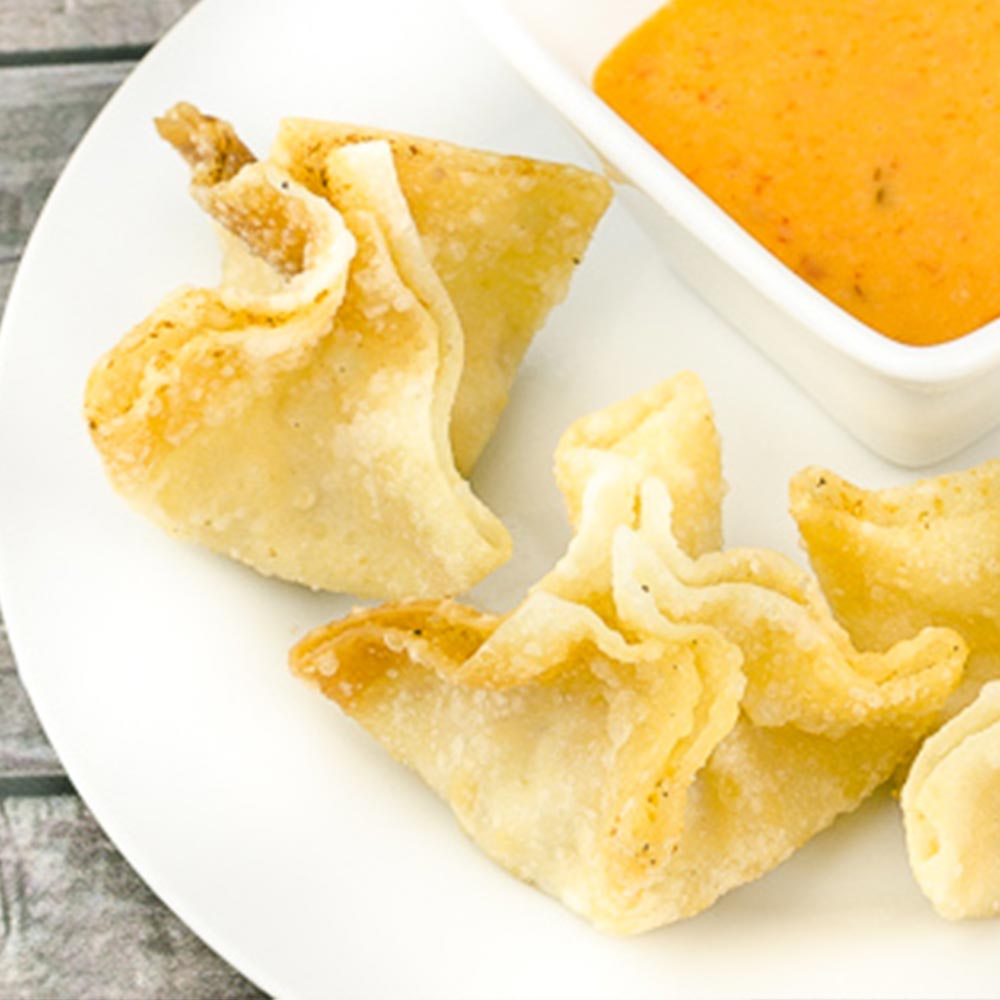 I decided to look up the history of the crab rangoon. I was surprised in my five minutes of research on Google to find that the “Rangoon” (notice it’s capitalized), is from the city Yangon, also called Rangoon. It’s the former capital of Burma, which is now Myanmar. History lesson of the day, check. Rangoons are also thought to have been invented in the U.S. So why would an American dish have the name Rangoon in the title? My only thoughts are that I need to do more research, or that the “inventor” had ties to the city. I do not ingest shrimp rangoons because of the ancient Asian history. Rather, it’s eaten because its delicious creamy, garlic, seafood filling is spot on in my book. Shrimp Rangoon anyone?

These bite-sized delights are pretty simple to make if you have the patience to fry. My kitchen elves lost the cord to my deep fryer so I’m left with the old fashion cast iron skillet method. With a little origami work with the wonton, you’ll have a nifty looking appetizer in no time…well in about 30 minutes.

I like to heat the frying oil while I’m prepping everything so it’s an even temp. While that’s going, I make the shrimp rangoon filling. Since I want my shrimp cooked and not raw, that’s first. I had medium size shrimp on hand in my freezer so I chopped it into bits. To add an extra layer of flavor, (in a separate pan from the “frying oil”) I tossed in some garlic and salt and cooked it in a wee bit of olive oil for a couple minutes. Shrimp doesn’t take long to cook. I’d say about five minutes max. Pretty in pink.

In my mixer, I combined the cream cheese, Worcestershire and soy sauce, onion and garlic powder, and a bit of sesame oil. I also tossed in a little green onion (scallions). Mix, mix, mix until creamy, then add the shrimp.

1. Lay your wonton wrapper on a flat surface; fill with about 1.5 teaspoons of filling. This is not an exact science. Your mission should you choose to accept it: don’t make the filling overflow. Not hard, however, it does require a level one kitchen ninja to complete, but my eight-year-old has already hit that milestone. You will do fine.

2. Next, bring two opposite corners together to form a triangle (three-sided polygon).

3. Bring the other corners together which form the long side (hypotenuse). Ever made a fortune teller as a child? It’s similar to that.

Now that you have a 3D edible shrimp container, it’s time to fry. This part only takes a couple minutes; maybe three to five. Once it’s the right color, light golden brown, you’re done. Now, just put on a paper towel to catch any excess oil, then enjoy!

If you’re up for making dipping sauce at home, check out my recipe for homemade teriyaki sauce or bang bang sauce. You can also try a sweet chili sauce. 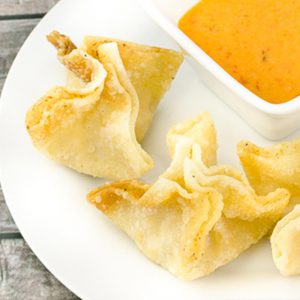