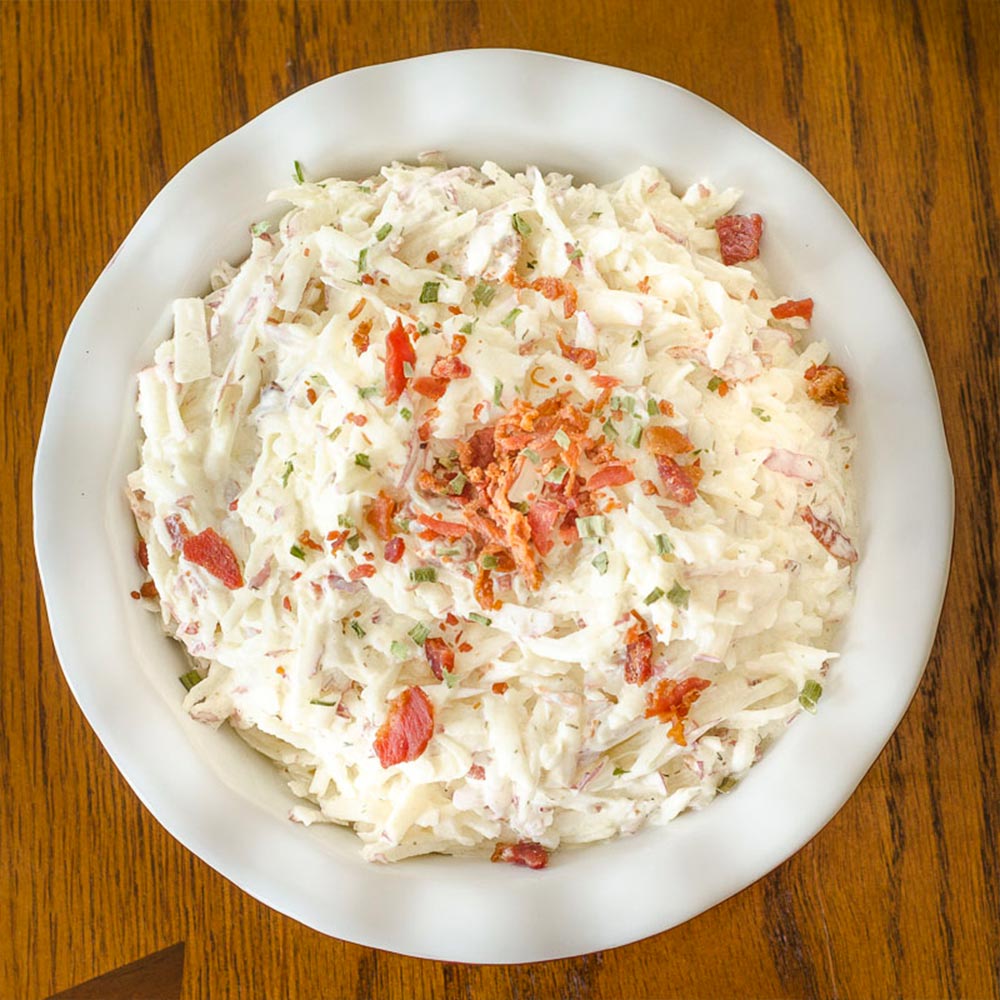 Let us be honest with each other, there are probably three million potato salad recipes floating about, but I couldn’t care less about any of them. A bold statement for a chica who just wrote a shredded potato salad recipe and brought you here to read it. Never have I understood why potato salad disgusted me until I took the time to analyze the logic behind my distaste: big chunks of cold potatoes. It’s a texture thing.

Cold chunks of potatoes have no place in my kitchen. Being the humble guest I am, I will try anything put out on a potluck table. Since it’s such a popular dish and I entertain quite a bit, I had to experiment and find something that I could prepare and be happy about putting on my own table. It did not take long once I realized it was all about the texture….so I simply shredded. If you disdain chunks of cold potatoes, perhaps this shredded potato salad recipe is for you too.

Bring the water to boil and add a bit of salt. I like to have the water ready so I can toss the potatoes in as soon as they are shredded. Potatoes like to get all chameleon on you when they are cut by turning brown when exposed to air. It’s actually a reaction of the enzyme polyphenol oxidase. When you expose the potato’s cells to the oxygen in the air it turns brown (same with apples). Yeah yeah, I know…this isn’t high school. Shh…sound knowledgeable when you explain it to the next person. Moving on.

Shredding the potatoes is straightforward. Grab a potato and rub that thing against the cheese shredder. Mind your knuckles here. Nobody wants to eat the remnants of your shredded knuckles in their potato salad. I used the bigger holes since I was afraid “finely” shredding the potatoes would make them cook too quickly and become mushy. Don’t bother with peeling them unless you wish. I personally like the color the red skins produce, and I read here that they also add additional vitamin C, vitamin B, potassium, and fiber to the dish. So when people think you were lazy for leaving the peels on, drop that bit of knowledge on them and they’ll shut it. You weren’t saving time, you were saving their lives…alright that’s a stretch, but give it a shot.

Boil the potatoes for a couple minutes and drain. Rinse them with cool water to stop the cooking process and get all the excess water out.

The rest is pretty easy, combine the mayo, dill, dill pickle juice (secret ingredient), salt & pepper, mustard, onion, and bits of bacon. Mix it, chill it (best to make it the night before), and eat it! Top it with cute bacon bits, cheese, and chives and you look all fancy at the family barbecue.